Please attend our Home Days event July 8th -10th! Stop by the Beautification & Pride Committee tent, I will be there in the evenings selling raffle tickets and talking with residents.

Your Council has been active the last few months even after passing this year’s budget!

On April 5, Council passed Ordinance #10005-2016 to give a demolition grant to a company planning to build a new headquarters on Brookpark Road. I was able to get a few amendments passed on this legislation that require actions be taken towards building the new building before the grant money is given.

Resolutions #20-2015 and #05-2016 were passed on April 19 granting conditional use permits for two auto body/collision businesses, allowing them to move to Brook Park.

Resolution #03-2016 I sponsored this resolution urging the Mayor to keep Fire Station #2 open. I would like to thank Council for supporting this legislation.

During the Budget process, councilpersons Julie McCormick, Jan Powers, Jim Mencini and I offered an amendment to fund the Senior Grass Cutting Service, as once provided by the City. The Idea was summarily shot down and then at the next meeting after the budget was passed, an ordinance was brought forward with amendments to add grass cutting assistance to our snow plowing assistance program Ord. #10012-2016. Although I believe the old service provided by the City would be better and less expensive, I voted for this new assistance program because our seniors needed something to replace the service that was taken away last year.

Ordinance #10016-2016 To provide construction administration services etc. for the Smith Road Sanitary Sewer project passed Council on May 3. I am not sure how we are paying for this project at this time, (the plan was to borrow) but we may be able to change our current appropriations and pull some funds out of our budget.

Last year, I voted for (and Council passed legislation to join) the Consolidated Communications Center (Central Dispatch) with the City of Parma based solely on the safety of our residents. I am very concerned that this has still not been implemented after so many months waiting, but rest assured I will keep asking for a progress report!

If I can’t immediately help when you call me, I will keep sending “Memos” to the mayor with your neighborhood complaints and or concerns at 216-265-9159.

Thank you for your continued support! 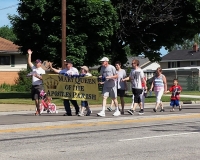